PARIS — The Michelin guide to fine dining recommends duck foie gras with melon and pepper for those who can afford to treat themselves to a meal at the Jules Verne restaurant on the second floor of the Eiffel Tower. 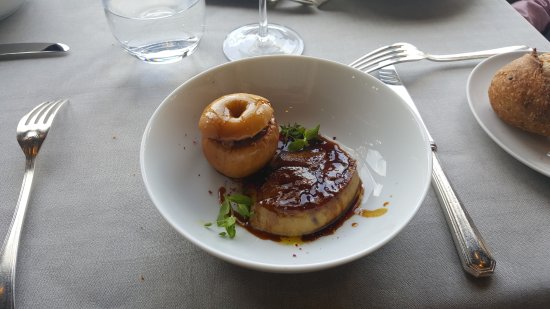 This photo of Le Jules Verne is courtesy of TripAdvisor

It will be one of the choices on the menu Thursday night when U.S. President Donald Trump and his wife Melania dine at the venue while enjoying the view over the City of Light as guests of France’s Emmanuel Macron and his wife Brigitte.

The following day, Trump will take pride of place beside his French counterpart on the reviewing stand on the Champs-Elysees for the annual Bastille Day military parade.

For someone who has marked himself out as representing the opposite of Trump’s isolationist policies, Macron is certainly doing his best to impress the U.S. leader.

Macron, a liberal centrist, had strong words for “Mr Trump the American” during his election campaign earlier this year, and has repeatedly criticized isolationist policies in general.

Trump could in fact be forgiven if he is a little confused about how Macron feels about him.

The French president was widely described as “trolling” his U.S. counterpart in his response to Trump’s decision to pull out of the Paris agreement on limiting climate change.

Macron joined German and Italian heads of government Angela Merkel and Paolo Gentiloni in declaring that the agreement was “irreversible.”

But more cuttingly, in an unprecedented English-language address from the Elysee, he invited U.S. scientists, entrepreneurs and “responsible citizens” disappointed by Trump’s decision to move to France to work on climate issues.

And he then took to Trump’s own favorite medium, Twitter, to launch an all-caps appeal: “Make our planet great again.”

Against this background, there was some surprise at news of the invitation to the Bastille Day parade – probably the highest-profile invitation a French president could give to a foreign counterpart.

The ostensible spur for the invitation is that this year’s parade marks the 100th anniversary of the U.S. entry into World War I on France’s side.

A contingent of U.S. troops has already been rehearsing on the Champs-Elysees, where they will march alongside French soldiers on Friday.

But in reality, the wooing of Trump is line with Macron’s own approach to diplomacy – one in which France is able to talk to everyone, according to analyst Manuel Lafont Rapnouil of the European Council on Foreign Relations.

Macron has already received Russian President Vladimir Putin in Versailles, despite their political disagreements, Lafont Rapnouil pointed out in a phone interview with dpa after the Trump visit was announced in late June.

Pacers roll past Lakers in 4th quarter for skid-stopping win